Do you know the story of Papatūānuku and Ranginui? I didn’t either.

I’ve never been a natural when it comes to learning languages, and goodness knows I’ve tried. Until recently, I had not put enough effort into learning to kōrero Māori, but that changed in 2018 when I completed a course in te reo Māori.

So, although I still can’t speak anywhere near the amount of Māori words and sentences that I would like to, I have had my mind opened to a lot more of the culture, which I have thoroughly enjoyed learning, and I have a lot more learning yet.

What I discovered and wanted to share though, is the story of Papatūānuku and Ranginui. In basic terms, their story is that of romance and love, and the creation of the world.

Locked together in a tight embrace, Papatūānuku (earth mother) and Ranginui (sky father), have many children, all males, and they are forced to reside within their parents embrace and always in the darkness. They wonder what it would feel like to live in the light, and they regularly discussed their plight.

Tūmatauenga, the most fierce brother thinks that if they killed their parents, they would be freed.

Tāne disagrees – he believes that they can, and should be separated, sending Ranginui to the sky above to watch over them, but keeping their Māmā close to them, so that they can still be nurtured by her.

Rongo was the first to attempt to separate their parents. Tangaroa and Hamiatiketike were next to give it a go, but it was a futile effort. Papatūānuku and Ranginui lovingly clung onto their embrace.

It was Tāne, god of ngā ngāhere (forests} and ngā manu (birds) who, after many attempts finally pushed the lovers apart. Instead of standing and pushing with his arms as his brothers had attempted to do, Tāne lay on his back and used his strong legs, stretching every sinew in his body, and he pushed until with cries of anguish and surprise, Papatūānuku and Ranginui, the lovers, were prised apart.

It is said that the mists that rise from the forests are the tears of Papatūānuku for her lover. Always in sight, but never again able to embrace.

This bowl represents Papatūānuku in green, with the white and yellow strip of light separating her from her beloved Ranginui, represented in blue. Her tears are symbolised in the white, whilst the yellow is their sons, basking in the new found light separating their parents.

A special piece of your own is but a click away! If you’re keen on a McQuilled custom piece, then just click here. Give me a few bits of info and I can come up with a plan with you! 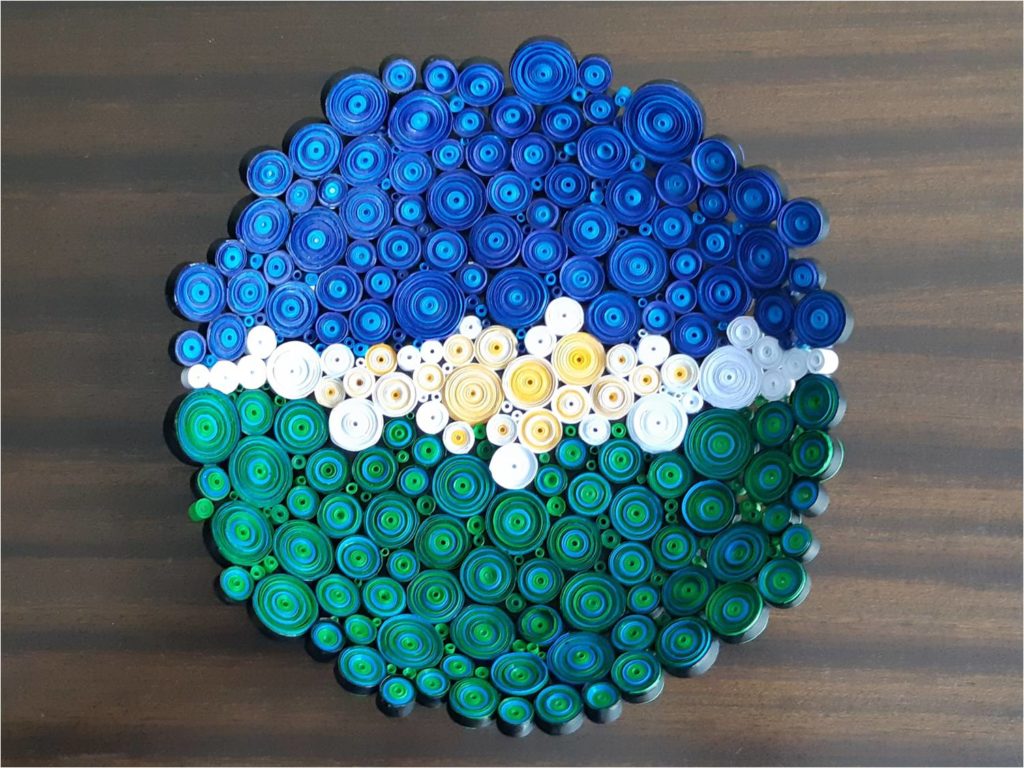